No grounds in golf invoke raw emotion like Augusta National, and none are so hallowed. As you approach the old clubhouse down Magnolia Lane, the ghosts of Jones, Hogan, Nelson, and Palmer seem to walk about the property with the patrons. It’s something you have to experience — first hand.

Your Masters badge isn’t a ticket to a tournament, it’s a passport to history.

WE BUY YOUR EXTRA & UNUSED MASTERS TICKETS
Do you have extra and unused Masters Practice Round Tickets or Tournament Badges you want to sell?
Call 404-467-0227 or Click Here for a quote.

Empire Tickets is not sponsored by, affiliated with, or a partner of The Masters Golf Tournament, Augusta National Golf Club, or Augusta National, Inc. Empire Tickets is an independent global sports travel & event management company and a provider of corporate and fan travel packages and hospitality. The use of the word "The Masters" or other trademarked or copyright material of ANI is for descriptive and informational purposes only. Prices may be above or below original face value.

Do you have extra & unused Masters Practice Round Tickets or Tournament Badges you want to sell?  Call 404-467-0227 or Click Here for a quote.

History of The Masters

In 1857, when Belgian immigrants Louis and Prosper Berckmans purchased property north of Augusta, Georgia, for their plant nursery, it was already thriving with fruit trees and shrubs. The previous owner had named it Fruitland, and had begun construction of a large home he called Fruitland Manor. The Berckmans completed the home, and their nursery was a success, eventually seeding millions of now-famous Georgia peaches all over the state.

After his early retirement from the game at age 28, golf legend Bobby Jones wanted to build a course where he could play golf with his friends in peace. In 1931, Jones’ partner, Clifford Roberts, found the Fruitland Nurseries property on the market. The site was perfect. Jones and Roberts agreed to a price of $70,000 for the acreage and Fruitland Manor (now the Augusta National Clubhouse). In 1933, the cathedral that is Augusta National Golf Club was born.

Since its inception in 1934, the Masters has evolved into the most prestigious tournament in golf. The azalea-strewn hills at Augusta produce elevation changes that confound the best players in the game, and the undulating greens have been the site of some of the most iconic moments in the storied history of golf.

From Jack Nicklaus’ final-nine charge in 1986, to Ben Crenshaw’s unforgettable emotional avalanche on the 18th green in 1995 and Tiger’s magical run through the 2000s, the Masters has encompassed all the greatness the greatest game has to offer.

The exacting shots Augusta National demands take a slow toll on the uninitiated, but each year a few players find the requisite combination of guts and precision to separate themselves. 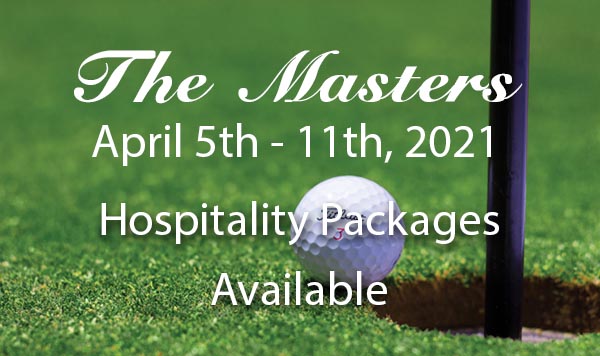 Empire Tickets is an Atlanta-based ticket broker specializing in premium seats to high-profile sporting events, concerts, and theatre productions across the US and Internationally. Our company offers tickets for a broad spectrum of events. We are able to provide availability of tickets or event access through our various contacts and sources. Our ticket prices are often higher than the face value of the tickets and reflect the effort and costs of obtaining and reselling the tickets. To get the actual face value printed on the tickets you are considering for purchase please contact our sales team at 404-467-0227, option 1.

We are not affiliated nor licensed with any box office, promoter, venue, stadium, theatre, sport team, or sporting association. Any and all copyrights, trademarks, or trade names used within our web sites are for descriptive purposes only. We do not act on the authority or official permission of any of the above mentioned entities.